It's a little bit of tuscan style soup and zucchin

Updating all around and if you are curious, check

Ltd11 on March 12th is officially cancelled. In t

"Hope lies in dreams, in imagination and in the co

When you are down and wandering and need an uplift

@breakfastprojectsf , thank you!!! Your delicious

Thinking back to the Green Room Gala already a mon

Collect them all and save the date for our biggest

Happy New Year Everyone! May it be filled with sat

Always looking for signs out there that we are on

Just thankful. People are amazing. This is a mini

Looking for signs and sometimes they are right the 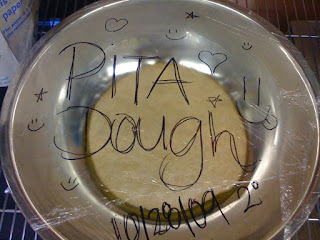 I wasn’t sure how to tackle the world of grains and beans, but it was time to get a sense of the depth and breadth of it.   So we tried a variety of things:
a) We lined up a variety of grains and beans and poured them into origami boxes we had folded together and labeled, then looked at the similarities and differences.  Much discussion on grain vs. bean/legume and the ways that many cultures around the world eat a combination of beans and grains which nutritionally results in more complete proteins.

Origami in a culinary arts class? We needed some hands-on activity, and origami is great as long as you are prepared for first timers.  Often there will be a hidden origami pro in one student which can help too.  I’m already running into students being organized enough to be able to produce a lot of output and it gets challenging to find ways to keep their hands busy without ending up with a 5 gallon bucket of chopped carrots after half an hour.  I was hoping origami would help with this.  It can when you have enough “buy in” and the project is doable.  Having a cutting project (such as trimming parchment circles for steaming baskets) is also good, but you need pairs of scissors.

b) We made hot cereal.  Many students have never had whole oats before and it is close enough in flavor to rolled oats that they could compare and contrast – and several asked when we could have hot oats again. 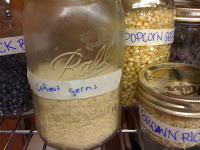 c) We put things away and organized a grain and bean shelf.  I love watching the discovery that happens as someone takes ownership of their project.  In the picture at right of some of our jars, this student’s labeling was essentially correct – it is a wonderful reminder about experience, generations and our changing lifestyles.

d) We got into hummus and pita bread. As long as you have a baking stone and get it up to temperature, pita bread is more satisfying than flat bread because it bakes quickly and watching it puff up in the oven is immediately gratifying.  Roll the circles of dough out paper thin for this result. There was  more discovery as students blended or pounded the “seeds” of chick peas into a familiar spread with garlic, sesame tahini and lemon juice.  Many had never tasted it before and we compared it to classic tomato sauce on our freshly baked pita.  We had to make more pita dough for later in the week.

e) Finale Friday: hummus with pita, chicken soup with quinoa, tabouleh (bulgar is an easy grain to make in the class room), and an onion-pepper relish.  It was a successful meal.

Next time?  This could be broken down into more lengthy projects but for our class these quick glimmers were good ways to expose without over saturating.  It helped keep the curiosity alive in the room. 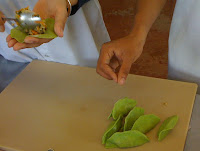 Found it. New May Wah’s on Clement Street and 7th Ave. Don’t look at the chicken, meat or fish sections. Do look at the fresh noodle aisle and the myriad of bottled sauces. Potsticker wrapper heaven, the thicker ones, that even come in spinach green (don’t worry, the flavor is the same, you just get a lovely contrasting color).
We found a recipe for a low meat filling that allows you to pre-cook the meat part of the filling, which helped our timing. We could make the filling itself one day, then focus on filling the wrappers and cooking the next. Potstickers would be a good one for an event, the many pairs of hands caught on quickly and produced almost 100 potstickers in no time. The trick would be to make sure to keep them from drying out and to plan out the cooking of them adequately. But this was voted one of our best “meals” of the quarter. 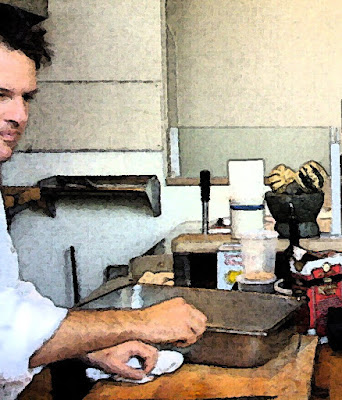 Laurence in his kitchen as we work.
One Tuesday at the end of last quarter we were able to visit Laurence at NOPA restaurant for our 5th period afternoon class.  Laurence Jossel, one of the owners of NOPA and Nopalito restaurants, has been a wonderful support to our cooking with teenage youth.  From letting us forage in their walk-in to jumping in over the summer with over thirty interested teens without any warning, he has a magnetic way about him and a contagious passion about food and cooking.
I was amazed as he spent a few hours with us that afternoon in his restaurant as we peeled garlic together for one of the spreads used on pizzas.  Amazed at how much value to cooking that could transpire as the students continually peppered him with questions.  I wish I could have taped the conversation. He made peeling garlic a pleasure and the students loved the fact that we were making something people were going to pay for and enjoy, while a number of NOPA chefs made a point of coming over to admire our work.  Our walk back to the high school was full of that excited talking after a wow experience.  “He is a really nice guy,” was the unanimous refrain.
How do you measure the value of this afternoon?   We know in our hearts that coming together around food is valuable and when we take it this direction, where community and food can connect with working practice, it opens unmeasured doorways in one’s mind.  Thank you Laurence for keeping your door open with a smile.